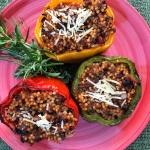 Sprinkle extra parmesan on top of bell peppers. [Optional: sprinkle with fresh herbs, as well]. Serve bell peppers with a side of salad, fresh corn, or our Shake & Bake Parmesan Sweet Potato Fries.

Tried this Recipe? Pin it for Later!Mention @Platein28 or tag #platein28!